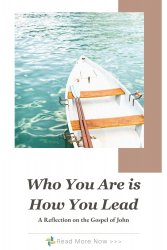 There was a time in my life when making a name for myself was extremely important. I never said it out loud, but I wanted to be known for something significant. I thought that would give me a reason to like myself and that I would really be somebody who had accomplished something.

Even though I felt this way, I said I wanted to be like Jesus. I confess at that time I did not understand why Jesus did not share my preoccupation for notoriety. In fact, I was astonished at how indifferent Jesus was to fame or reputation.

For example, during the early days of his ministry in Galilee, when he was making an impact with the wisdom of his words and the power of his deeds, he deliberately asked the people he helped not to say anything about it to other people.

One day in the wilderness, after feeding 5000 people, the crowd got so excited they wanted to make him their king.  He turned down their offer without batting an eye.

On the last night of his life, after the disciples had been quarreling all afternoon about “making names for themselves” and over who was going to be greatest among them, they gathered for supper in the Upper Room. Not one of them was willing to lower themselves to do the servant’s task of washing the other’s feet. According to John, “Jesus, knowing that the Father had given all things into his hands and that he had come from God and was going to God, got up from the table, took off his outer robe, and tied a towel around himself.  Then he poured water into a basin and began to wash the disciples’ feet…” (John 13:3-5).

In other words, Jesus did not hold himself above doing the lowliest of tasks. He did not care about status, position, or prestige.  And, there are those puzzling words Paul used in his letter to the Philippians, “Let the same mind be in you that was in Christ Jesus, who though he was in the form of God did not regard equality with God as something to be exploited, but emptied himself…” (Philippians 2:5-7). At the time I was trying to make a name for myself, I often wondered how Jesus could be that way and why something so important to me was not important to him.

So, why am I telling you all of this?  Well, I believe this is one of the secrets to courageous leadership.

Acceptance of Who God Created You to Be

Jesus didn’t have to make a name for himself because he wholeheartedly accepted the name God had given him. In the Hebraic sense, a name stood for the whole reality of the person. For Jesus to accept and be satisfied with this name meant that he totally accepted who he was, when he was, and where he was in history.

Who You Are is How You Lead

Now, I’m not dismissing traumatic experiences, but whether you agree or not, you have been shaped into the leader needed for your church and for your community.  You might find yourself in a place you never dreamed of being, but life is good where you are.  You might find yourself with people with whom you identify as not your type, but life is good and enriched by the people entrusted to your care.

The secret to courageous leadership is found in the condition of your heart. You might read books on leadership and attend seminars on leadership, but until you accept the truth that your life is good, that who you are, where you are, and when you are is a good gift from God, you will not be the person God intends you to be, much less the leader needed for this time. Who you are is how you lead.

The Disciple Whom Jesus Loved

Look at the writer of the fourth Gospel. The writer is traditionally known as John. Yet, at no point in the Gospel does John identify himself by name.  He describes himself as “the disciple whom Jesus loved.” Why would he identify himself this way? Was he a spiritual egotist, suggesting that he was the favorite among the disciples? Was he part of the inner circle, making his way to the right hand of Jesus?  I suppose either could be true, but I think such speculation reveals more about us than him.

Here is what I think. John, after meeting Jesus, began to live into his name. He began to become who he was created to be. I think when John referred to himself as “the disciple whom Jesus loved,” it was his way of saying, “The most wonderful thing that ever happened to me was the fact that Jesus loved me.  Before then I never had a reason to love myself.  My father, Zebedee, was so busy in the fishing business he did not have time for me.  My mother was a proud and ambitious woman. She had dreams of who my brother and I could be. She was always trying to get us in on the right and left hand of glory.  And my brother, James, was terribly competitive.

But I never felt I had much worth until the day Jesus met me beside the sea. I could hardly believe it. He didn’t have an agenda. He didn’t pressure me. He didn’t make me feel as if I had to be number one in order to earn his affection.  He simply took delight in me. He took my gifts and interests seriously. And as our friendship developed an incredible thing happened. I began to love myself. For the first time in my life, I realized I did have worth and that who I was and when I was and where I was had value.”

“This is why I chose to refer to myself as ‘the disciple whom Jesus loved.’ At first, it seemed like a miracle.  Jesus actually loved me.  But the more I lived with it, the more I realized that it was just the way it was supposed to be. I didn’t need to strive to be somebody. Because of Jesus, I was somebody. Before I met him, I was the son no one had time for or the child a parent was always trying to push, or a sibling’s rival.  But now, I see myself in a new light. I am a follower of Jesus.  I am the disciple whom Jesus loved, and because of that I am now a person who loves himself and who loves others.”

The Secret of Courageous Leadership

The secret to courageous leadership is to be who God created you to be…nothing more and nothing less.

This week, try living up to your name and be who God created you to be. Contact a trusted friend and tell him or her how God’s love for you has shaped you into the person you are. Then tell them how God’s love has shaped your leadership. Just think about it. You are the leader whom Jesus loves.

Who you are is how you lead!

An Invitation to Become a Courageous Leader

Leadership and Conflict
Scroll to top