This Advent Season, we are again asking ourselves, “How do we as the people of God live out God’s mission for the world? We are in the midst of profound shifts in our church, in our country, and in the world. Whether the shifts are religious, cultural, racial, generational, or political, we are ready to hear the prophecies of the Advent message. And we are not only ready to hear the message, but we are anointed to live out the message as God comes to be with us in Jesus.

Even though we have been through a number of Advents, we know that when we, as Jesus followers, take seriously our mission in this world and when we truly believe and live out God’s love, there is hope for our broken and hurting world. New life is born, and hope emerges.

This hope has been offered in many ways over the years. When we gather to worship this Christmas, many of us will hear the song, “O Holy Night.” It was written as a Christmas poem in France in the mid-1800s. When the words were put to music, their message began to change the world. In fact, “O Holy Night” was banned in several churches in France. Later, the third verse of the song was left out because of its message. The reasons were always based on theology, but the message of hope and justice was clearly proclaimed. The third verse is as follows:

“Truly He taught us to love one another.

His law is Love and His gospel is Peace.

Chains shall he break, for the slave is our brother,

and in his name all oppression shall cease.”

Advent is a time of preparing for God’s justice to bring hope to those who are broken and lost in this changing world. May the hope of the coming of Jesus fill you with world-changing justice.

The LORD God’s Spirit is upon me because the LORD has anointed me. He has sent me to bring good news to the poor, to bind up the brokenhearted, to proclaim release for captives, and liberation for prisoners, to proclaim the year of the LORD’s favor, and a day of vindication for our God…I, the LORD, love justice… – Isaiah 61:1-2, 8

Imagine a raging river full of rapids that surge over a waterfall. You see people struggling in the current of the river. As they are trying their best to swim to shore or grab a hold of rocks, they are being swept downstream toward the falls.

You also see people along the shore trying to help those struggling in the rushing currents. Some are reaching out at the edge of the falls to snatch victims at the last moment. Others are upstream, stepping out on the rocks to grab whomever they can reach. A bit further upstream there are some throwing out lifelines and pulling the struggling people to shore. Even further upstream there are some people teaching people how to swim. You even notice that there are some trying to install fences along the river to prevent people from falling in. At the same time, you see others, gathered at the bottom of the falls, trying to recover and save the few who survived going over the edge.

Not one of the helpers along the riverbank can catch everyone in need, but together they each do their part along the way. The one thing they all have in common is a love for helping others.

An Example of Love

One example of that love can be found in a man named Trevor Ferrell. When Trevor was eleven years old, he saw a television news report on Philadelphia’s inner-city homeless. He couldn’t believe people were homeless and lived on the streets. He began questioning his parents why people didn’t have a place to live. It took a while, but his parents, Frank and Janet, reluctantly agreed to broaden their sheltered horizons.

One evening, they left their home in an exclusive suburb and drove downtown. One block past city hall, they spotted an emaciated figure crumpled on a side-walk grate. Frank stopped the car and eleven-year-old Trevor got out and approached the man.

With a blanket in hand, he said, “Sir, here’s a blanket for you.” The man stared up at Trevor at first. Then, he said softly, “Thank you. God bless you.”

That encounter altered the Ferrell’s life forever. Night after night they would drive downtown, trying in small ways to help the street people. They emptied their home of extra blankets, clothing, and dozens of peanut-butter sandwiches. When people learned what they were doing, someone donated a van and others charted nightly food distribution routes. To the Ferrell’s surprise, “Trevor’s Campaign” had begun.

At a young age, Trevor found himself explaining what he and his family were doing to local media. Eventually, he was explaining his campaign to major news outlets, late-night television, daily talk shows, the President of the United States, and Mother Teresa. They all wanted to meet the small boy with the big mission. When asked why he was caring for the homeless, he simply replied, “It is Jesus inside of me that makes me want to do this.”

In an interview regarding “Trevor’s Campaign,” his father stated, “Our social life has changed a lot since the campaign began. Our church is behind us one hundred percent, but some of our old friends don’t understand why we’re messing with the homeless. They just tolerate our ‘idiosyncrasies.’”

For twenty years, a van traveled each night to the downtown streets of Philadelphia. It stopped first to deliver food to the residents of Trevor’s Place, a ramshackle rooming house where some of the former homeless lived. Then it proceeded to feed the hungry people gathered on sidewalk grates and street corners.

When asked how the handouts have made a difference in the complex business of helping the homeless, Frank Ferrell sighed deeply and said, “We’re trying to meet short-term needs and figure out ways to bring long-term changes to people’s lives. Sometimes it seems like just a band-aid. But this is how we build relationships. These people become our friends, and they trust us to help them in bigger ways.”  Then Frank paused for a moment, looked at the landscape of broken bottles and bodies, and said, “There are plenty of struggles, But I know one thing: giving has made all the difference in my life. I used to just read the Scriptures. Now I feel like I am living them.”

Trevor’s Campaign has evolved over the past 32 years. His objective is to meet human needs, alleviate suffering, and restore hope by developing comprehensive programs for vulnerable children and adults in the Greater Philadelphia area.

Trevor is one of those people along the riverbank seeking to save those who are drowning in the changing world in which we live.

Where will you see a human need today? How might God’s love become human in you? Begin to imagine how you might respond to the needs around you.

O God, you have taught me to love you and the people around me. You have put within me a hunger and thirst for righteousness. Use me as an instrument of your peace, so that the people I meet each day will experience your love in and through my words and actions. Help me be a person who offers hope in the name and love of Jesus. Amen.

Consider your thoughts, feelings, and actions from today. Where did you see human need? How did you respond? What do you need to become more the person God needs you to be for this time of change?

Is it possible for the church to be a center of hope and healing in your community? If so, what needs to happen to make it so?

Consider the people in your community this week of Thanksgiving and beyond. When we pause to reflect on how the church can be the center of hope and healing, we consider engagement with people in our communities all year.

Penny Lernoux described engagement in the community and the world this way, “You can look at a slum or peasant village, but it is only by entering into the world, by living in it, that you begin to understand what it is like to be powerless, to be like Christ.” 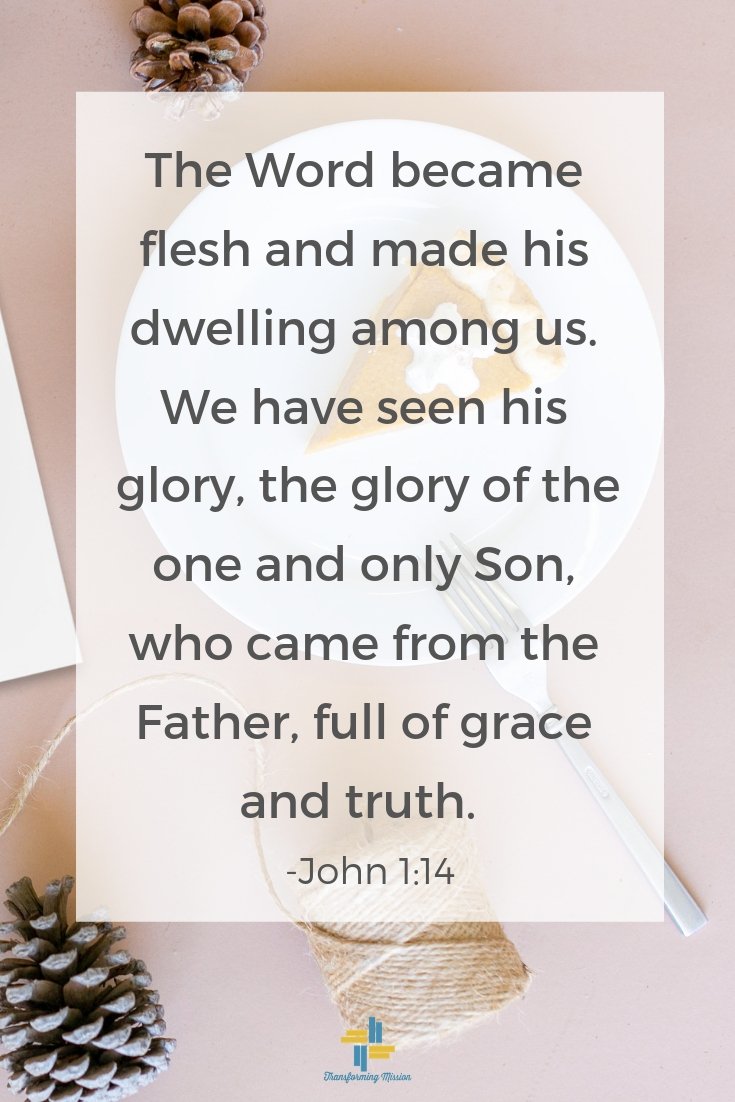 We believe you would take a giant step toward, not only offering hope but, by becoming hope.

Extend the Table Throughout the Year

As we celebrate the ways we bless people from Thanksgiving to Christmas, we also pause. What we do at the end of the year offers hope to our communities. We celebrate the connections we make with people, the ways needs are met during the winter, and the joy that comes from being a blessing to others.

We also know hope is needed the entire year.

Perhaps what you do this week and in the weeks to come to engage with people in your community will be the spark for a quarterly, monthly, or occasional experience with your community. Said more directly, our hope is the relationships you nurture in the coming weeks will be seeds of hope for your engagement in the community in 2019.

Whatever this week and the weeks ahead bring for you and the church, may you consider how God is inviting you to be an agent of hope.

Hope for A Blessed Thanksgiving

Tomorrow we will celebrate with family and friends. We will serve meals in our communities and perhaps enjoy a football game on television. There will be laughter and conversation, new connections and reunions. While we gather, we ask you to consider how we can intentionally extend the table throughout the year.

“I thank my God every time I remember you. In all my prayers for all of you, I always pray with joy.”

It is our hope that as you continue leading people to follow Jesus by engaging in the community, there will be one who will say to you, “I thank my God every time I remember you…”

We give God thanks for you and your leadership. We are grateful for how God has shaped and enriched our lives through you. May each of you be as blessed as you have been a blessing.

O God, by your grace, shape us into your loving presence in the world. Thank you for the opportunity to be partners with you in your work of transformation in Jesus’s name. Amen